Start Here in Harrow | Meanwhile Foundation Skip to title Skip to main content
We gather anonymised analytics data on website usage unless you opt out.
OK Opt out 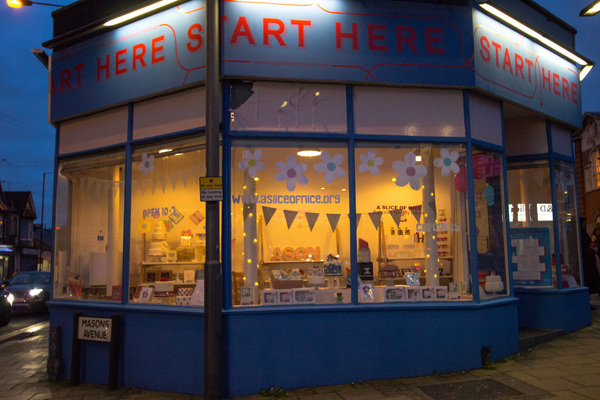 A cluster of properties in Harrow where brought back into use to facilitate a start up business support programme called Start Here. The various properties provided training space, retail test space, events test and finally starter office spaces.

Start Here @ Rayners Lane, formerly a library, provided a mixture of flexible and affordable workspace with an event space for applicants to use and a ‘pop-up’ shop as part of the Start Here Academy. The project took on its first wave of applicants in March 2016, and was used by more than 25 different organisations to test and establish their businesses, host events, and test ideas ideas in the pop up shop. The space has now closed so that it can be repurposed by the owners.

Start Here @ 1 The Bridge was previously an empty shop front which is now being used for participants of the ‘Start Here’ project. Launched in December 2015, the project has so far hosted 5 projects on a ‘pop up’ basis (for a period of 1 – 4 weeks), to enable new entrepreneurs to test their ideas, and build participants’ confidence and knowledge free of charge.

Step Up @ 1-3 Wealdstone High Street, these formerly vacant shops, were the next in the ladder of spaces available to the pool of start ups who have already gone through the 1 month pop up shops as part of the Start Here Academy. The shops are larger, available for 3 months at a time, and the users will be contributing towards utilities and other costs thereby creating an opportunity for them to take the next ‘step up’ towards having permanent shop space. These spaces were launched in October 2016.

Some of the project impacts include:

[email protected] Meanwhile Foundation is registered in England and Wales under charity number 1151901 and company number 08251662 at c/o Anthony Collins Solicitors Llp 134, Edmund Street, Birmingham, West Midlands, B3 2ES. We use cookies to improve your experience using this website.
Log in | Powered by White Fuse